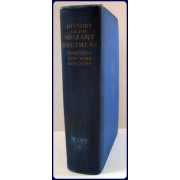 Boston: F. H. Gilson Company. 1909. 469pp. Hardcover. No dust jacket. In very good, clean condition. The external boards are lightly soiled and there is a library No. on spine however no other stamps or markings were found inside. *This volume contains the individual army record of nearly three thousand volunteers whose names are borne upon the muster-rolls of the regiment. It relates the story of the numerous battles and skirmishes in which the regiment participated, and traces the routes of its extensive and laborious marches through Virginia during the four eventful years of the Civil War, from Bull Run to Appomattox. It also contains portraits and biographical sketches of the three Colonels who conducted its movements and controlled its destiny, and pictures of many Officers and enlisted men who were connected with the Regiment and who shared in its glorious achievements and exalted renown. The history is also interspersed with incidents and events which happened during the prolonged and distinguished service of this noted organization, and which entered into and formed a part of its remarkable military record. S057.