BLACK SEPARATISM AND THE CARIBBEAN, 1860 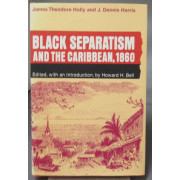 Ann Arbor:University of Michigan Press. (1970). 184pp. Hardcover with dust jacket.  The book is in fine condition, with a very good, slightly sun-faded and soiled dust jacket.  *From the dust jacket..."The Caribbean on the eve of the American Civil War --Africa during the same period-- beckoned black Americans whose patience with white hypocrisy and violence had run out. At the National Emigration Convention in Cleveland (1854), James Theodore Holly assumed leadership in the effort to make Haiti the center of interest for the black separatist movement. Both Holly and J. Dennis Harris became recruiting agents for the cause; and both men published fascinating accounts of Caribbean life, after visits to the area. These two works, now republished in their entirety, offer first-hand insights into the temper of the early black separatist movement in America."