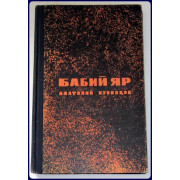 1967. 288pp. 1st. ed. A very good copy despite light wear at top of spine. Some marginal pencil notes and underlining. Originally appeared in #8-10(1966) of YUNOST'. Novel dealing with the murder of Kievan Jews by Germans. Reprinted in 1969 in the West after author's defection inserting passages cut by the Soviet censors as well as passages left out by himself in anticipation of difficulties with the censor.