Account
Home » DEDICATION OF THE MEMORIAL HALL, IN DEDHAM, SEPTEMBER 29,1868.

DEDICATION OF THE MEMORIAL HALL, IN DEDHAM, SEPTEMBER 29,1868. 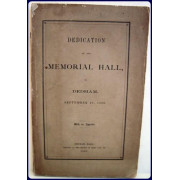 Dedham:1869. 91pp. Wrps. A tight clean copy. Jacket however has a few chips. Relates the history of Dedham, Ma. participation in the Civil War. The first major group of volunteers was assigned to Gen. Fitz John Porter. The second major group of volunteers a year later was assigned to Gen. Burnside. The account covers their participation in a variety of campaigns through 1865. An appendix contains a roll of officers and men from or credited to the town of Dedham, who served in the Army or Navy of the United States during the War of the Rebellion. Not listed in Broadfoot's