Account
Home » SPEECH OF MR. CALHOUN, OF SOUTH CAROLINA, ON HIS RESOLUTION IN REFERENCE TO THE WAR WITH MEXICO.

SPEECH OF MR. CALHOUN, OF SOUTH CAROLINA, ON HIS RESOLUTION IN REFERENCE TO THE WAR WITH MEXICO. 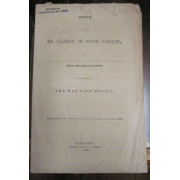 Qty:     - OR -   Add to Wish List
Add to Compare
Description
Washington: John T. Towers. 1848. 16pp. Soft cover. Self-wrappers. Embossed library stamp at top right corner. Hand-stamp discard stamp at top left corner. Ragged edges, typical of the period. "I then opposed the war, not only because it might have been easily avoided; not only because the President had no authority to order a part of the disputed territory in possession of the Mexicans to be occupied by our troops; not only because I believed the allegations upon which Congress sanctioned the war untrue, but from high considerations of policy; because I believed it would lead to many and serious evils to the country, and greatly endanger its free institutions". S017.
Tags: Americana, War, Mexican War, John C. Calhoun,
Similar Products