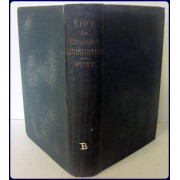 New York; D. Appleton and Company, 1864.  xxiv+448pp. Hardcover, no dj. Good condition. Ex-lib; library plate inside front cover, small library stamp to frontis and title page. Foxing to front endpapers, frontis, title page and endpapers;rest of interior is pretty clean.  Green pebbled boards are worn,soiled/sunfaded. Square and solidly bound. Edward Livingston (1764-1836) was an American jurist and statesman.  He was an influential figure in the drafting of the Louisiana Civil Code of 1825.  He represented both New York and later Louisiana in Congress and he served as the U.S. Secretary of State from 1831-33.