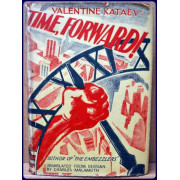 New York:Farrar and Rinehart, Publishers Inc. (1933). 345pp. 1st edition. Translated from the Russian by Charles Malamuth. Hardcover with dust jacket. Red boards very lightly soiled along spine, with wear to edges. Page edges darkened with age, while the topstain seems to have had something splashed onto it. Internally, end pages lightly age-toned, and the remains of an old bookplate can be found on the 1st free end-page.  There are several erased notes, in blue, on the inside rear board, but no other previous owners marks or signatures found.  Pages clean and bright.  The dust jacket is lighly soiled and shelf-worn with small chips and tears to edges and seams.  Still in one piece, price clipped, but with front flap sealed to inside front board. *From Wikipedia..."His novel, Time Forward, describes workers attempts to build a hugh steel plant at Magnitogorsk in record time. The title...was taken from a poem by Mayakovkey and its theme is the speeding up of time in the Soviet Union where the historical development of a century must be completed in ten years, The Heroes are described as 'being unable to trust such a valuable thing as time, to clocks, mere mechanical devices'. Kataev adapted it as a screenplay,  which was filmed in 1965."