Account
Home » STRANGERS ON A BRIDGE. THE CASE OF COLONEL ABEL

STRANGERS ON A BRIDGE. THE CASE OF COLONEL ABEL 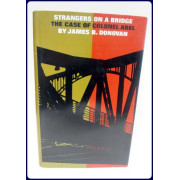 New York:Atheneum. 1964. 1st edition, stated.  xi+432pp. Hardcover with dust jacket.  Book in very good, clean condition, free of previous owners marks or signatures.  The dust jacket is lightly shelfworn with wear along edges but still in very good condition. * "In the early morning of February 10, 1962, James B. Donovan began his walk toward the center of of the Glienicker Bridge, which then linked West Berlin to East.  With him, heavily guarded, walked Rudolf Ivanovich Abel, master spy and for years chief of Soviet espionage in the United States. Approaching them from the other side, under equally heavy guard, was Francis Gary Powers, the U-2 pilot, whose exchange for Abel Mr. Donovan had negotiated.  These were the strangers on a bridge, men of East and West, representatives of two opposed worlds meeting in dramatic truce."