HISTORY OF THE OCTOBER REVOLUTION 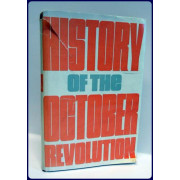 Moscow:Progress Publishers. (1966). 1st edition. 441pp. Hardcover with dust jacket.  Book in very good, clean condition, inside and out. The dust jacket is in good condition, still in one piece, but lightly soiled and shelfworn, with chips and tears to edges and folds. *"This book tells the reader how in October, 1917 the peasants and workers of Russia, under the guidance of the Communist Party, accomplished the greatest revolution the world had ever known. It depicts the triumphant march of Soviet power and the first post-revolutionary transformations in the country.  It illustrates the manifold activities of Lenin, the leader of the revolution; of the Central Committee of the Party, its local organisations, the work of the Soviet Government, and the revolutionary initiative of the people in 1917-1918." (Publisher's Note)