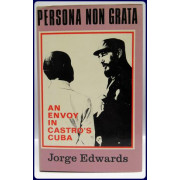 London:The Bodley Head. (1977). 275pp. Hardcover with dust jacket.  A very good, clean copy inside and out with a very good, slightly shelfworn dust jacket. *"Jorge Edwards, a Chilean writer and career diplomat, was appointed as his country's first envoy to Cuba by the late President Allende when diplomatic relations were re-established in 1970. His arrival in Havana coincided with what can now be seen as one of the most critical periods of the Cuban Revolution when the early dreams and ideals were having to be adapted to the harsh economic reality of that period."...dj.