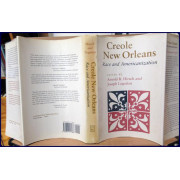 Baton Rouge:Louisiana State University Press. (1992). 1st edition. xiii+334pp. Illustrated. Hardcover with dust jacket. Top page edges lightly soiled but otherwise in very good, clean condition inside and out. The dust jacket is slightly soiled, with spine strip darkened with age, but otherwise in very good condition. *"This collection of six original essays explores the peculiar ethnic composition and history of New Orleans, which the authors persuasively argue is unique among American cities. The focus of Creole New Orleans is on the development of a colonial Franco-African culture in the city, the ways that culture was influenced by the arrival of later immigrants, and the processes that led to the eventual dominance of the Anglo-American community."...dj