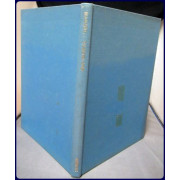 [Ridgewood, NJ: Gregg Press Incorporated. 1965.] Hardcover, no jacket as issued. 156pp. Gregg reprint of the German Handel Society 1876 Leipzig edition. Very Good condition. The covers are soiled, with moderate sun fading and shelfwear, and some old scotch tape stuck to front cover. Inside it is as new. We obtained this book directly from the publoisher over fifty years ago, it has never been privately owned.  Tamerlano was written in July 1724, and was first performed at London's Royal Academy of Music later that year. (cfm)