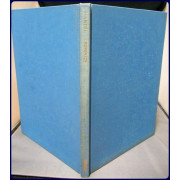 [Ridgewood, NJ: Gregg Press Incorporated. 1965.]  Blue hardcover with gilt titling to spine, no jacket as issued. 104pp. Facsimile reprint of the Leipzig 1883 edition by the German Handel Society. Very Good condition. Blue boards mottled, soiled with dust residue along edges and lightly sunfaded, interior is as new. We obtained this book directly from the publisher over fifty years ago, it has never been privately owned. "The Opera Berenice was composed in the period from December 18, 1736 to January 27, 1737, and first produced on May 18 of the latter year at Covent Garden. The libretto is probably older." (cfm)