THE EASTERN PRETENDER. Boleslaw Piasecki: His Life and Times 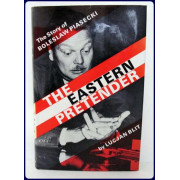 London:Hutchinson & Company. (1965). 223pp. 1st edition. Book in very good condition with hit of sun-fading to top edge of boards; and pages clean and bright with no previous owners marks or signatures. Dust jacket is sun-faded to spine but otherwise in very good condition as well. *"The Eastern Pretender is about a man whose fantastic life could easily be the subject of a thriller. A fascist leader in pre-war Poland, a hunter of Soviet guerillas during the war, a candidate for a speedy execution by an NKVD squad, he made a deal with Gereral Serov, Stalin's police chief, and not only saved his head but has achieved the unique position of a financial tycoon in the soviet empire."